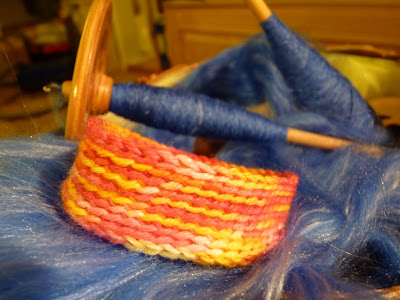 This blogpost about Bosnian crochet is an English version that is not translated, but completely re-written for Englishspeaking readers, thank's to Carol Ventura (dear Carol, you are a capable teacher, getting people to do things they have not thought of doing just by asking in a friendly way ;) of my blogpost in Swedish earlier this year. I have photos in that post that are not published here, so when I refer to my Swedish blogpost, please look at this link: Smygmaskvirkning

First some clarifying information about where I live. I live in Finland, my mothertongue is Swedish. My second language is Finnish. Finland is a bilingual country, very similar to Canada. The Finnswedes have lived along the western and southern costs of Finland for hundreds of years. We have strong bonds to Sweden, stronger than to Eastern Finland. Our culture has much in common with Swedish culture in Sweden. We have our own Finnswede media, but we also watch Swedish television, read Swedish books and magazines, listen to Swedish radio, but, and this is where we are oh so Finnish: we cheer for the Finnish sportsmen :) What could say more about a people than that?

Bilingual surroundings can sometimes cause confusion, because when you speak two or three languages in your everyday life, you mix things up. You think you are using the proper words, but you might have invented them yourself, or use a word that doesn't exist or that means something you didn't have in mind. It happens all the time, and usually there is no harm done (even if me and my wonderful Finnish husband, who just brought me a cup of French coffee, have communication problems sometimes!)

And now to the matter of this blogpost. Bosnian crochet is a technique where you use only slip stitches. By crocheting through the back or front loop, and by adding color, you can crochet quite nice looking things. The technique is best suited for small garments like mittens, gloves, and hats. It might have developed from tambour work, a way of embroidery where you use a small hook to draw the yarn through the cloth.

I got hooked by this old way of working crochet, when I read an article about tapestry crochet in the local handicraft guild's magazine. The article was written in Swedish, and strictly speaking it was an abstract of a Finnish article published in the magazine "Kotiteollisuus" in 1988. The headline of the abstract confused me, because it read "Krokvirkning", a Swedish term for Bosnian crochet. The writer, who by the way is a very skilled woodworker, obviously translated the Finnish term "kirjovirkkaus" (=tapestry crochet) without checking the accurasy of the word. This made me want to know more about crochet terms. Tapestry crochet, by the way, is called "flerfärgsvirkning" and "pälsbältesvirkning" in Swedish. English translations would be "crochet with many colors" and "fur-belt-crochet". Huh! How much more do you need to get confused :)

I wanted to compare five related techniques, so I crocheted five purses with the same yarn, Novita 7-veljestä, and a pattern with 3+3 stitches and 4 rows. I will not go into details about the purses, because I think the photo tells a crocheter pretty much. A few things though: Bosnian crochet in the front loop looks very much like knitted purl stitches (purse 3). This confused Swedish textile people when they first started analyzing garments in the museums in the first decades of the 19th century. Bosnian crochet had fallen into oblivion almost everywhere, but luckily there were still people who knew the technique. In purse 3) you can also see a typical design in Bosnian crochet with two colors, the way the stitch divides the pattern. There are 3 stitches in each motif, believe it or not! The pattern also slants to the right, and this is something that is often used to create patterns in Bosnian crochet. You can see it in the photos of the cover of the Swedish book, and the glove in my Swedish blogpost.

You can see the hooks I used in my Swedish blogpost. The flat aluminum and wooden hooks are of a type that was often used in Bosnian crochet at least in Scandinavia. The crochet hook is the Aero 3,5 mm I used in three of the purses. Hooks for Bosnian crochet were often made of old spoonhandles, sometimes silver, and with beautiful ornaments. I know at least one person who has made a hook in that way.

I very soon found that crochet terminology is not quite established, and that misunderstandings can spread very fast in blogs and the internet. I also found there is very little written in Finnish and Swedish about Bosnian crochet in the area I was interested in, the coastal area of Ostrobotnia (Swedish Österbotten, Finnish Pohjanmaa) in Finland.

As the guild's editor was interested in an article about Bosnian crochet, I started writing it. I added information about Bosnian crochet in Europe. Lis Paludan, the Danish textilehistory scientist who is especially learned in crochet, wrote her book "Haekling" about European crochet in the '80s. She has one chapter about Bosnian crochet in her book. The book was later translated into English, and published by Interweave Press under the name "Crochet, History and Technique". From what I read in other books, especially from Sweden, it seems that most of the texts goes back to Paludan. I could have found much more about this technique if I knew more languages, such as Bosnian.

Lis Paludan traveled through Europe in the '80s and looked at crocheted items in the museums. She found no crocheted pieces older than the late 18th century. Bosnian crochet seems to be older than other forms of crochet, and to be concentrated to the peripheral areas of Europe: Bosnia, Balkan, the Scandinavian countries, Scotland, the Baltic countries.

In the 19th century, and also in the 20th, Bosnian crochet was often crocheted very loosely, and then felted. That made strong, warm and soft garments. After I had finished my article, I learned from Caprifool in Sweden that his grandmother used very tight Bosnian crochet for workmittens. She felted and then brushed the finished mittens to be even stronger and durable. She and Caprifool used to have crochet competitions, sitting on their front porch crocheting away the fastest they could :) They used crochet hooks of the kind we are familiar with nowadays.

Hjördis Dahl, a textile scientist from Finland, wrote her thesis "Högsäng and klädbod" about textiles among Finnswedes. Hjördis Dahl mentions that Bosnian crochet has been used to some extent in the northern and southern parts of the Ostrobotnian coast. There is a photograph in her book showing a pair of very nicely crocheted white gloves. Marketta Luutonen, who is one of Finlands most highly learned and respected textile scientists, sent me two photos of Bosnian crochet in the Finnish National Museum in Helsinki. She was, by the way, the writer of the original article about tapestry crochet that was called Bosnian crochet in the abstract. She is in no way responsible for the misinterpretation. I used one of the pictures in my Swedish blogpost, here is the other one: 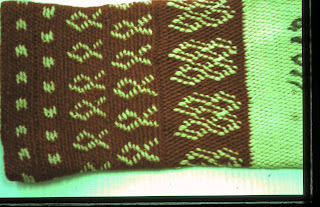 And that is about all I found. I asked people on a couple of Finnish Ravelry-forums for more, but nobody knew anything about history, even if a couple of crocheters were familiar with the technique.

Now, what about the word "krokvirkning" that confused me? Well, the terms for Bosnian crochet in Swedish are many. We call it smygmaskvirkning (=slip stitch crochet), gammelvirkning (=old crochet), påtning (I have no English word for this, but it's a technique used for making cords and for nålbindning aka nalbinding), gobelängvirkning (=gobelin/tapestry crochet), bosnisk virkning (=Bosnian crochet), and krokvirkning (=hook crochet). "Kärt barn har många namn", as we say in Swedish. A dear child has many names. The most common term right now is smygmaskvirkning.

The Scottish/English term shepherd's knitting for Bosnian crochet is also a bit confusing, as it is clearly a crochet technique. The term has been in use since the late 18th century. "Bosnian crochet" of course indicates the area where the technique has been widely spread.

This little excursion into the world of crochet terms taught me, besides my first rows of Bosnian crochet, that crochet terminology is far too big a field for an amateur to try to explore in a few weeks alongside all the other things in life that have to be done. But it was a fun place to visit. If some of my readers have more information, or want to correct mistakes or misunderstandings (there must be some, as I have no one who could read this through before publishing), I would be happy if you let me know. I would gladly return to the subject later.
Upplagd av Barbro Heikinmatti kl. 20:00